Research Associate Professor Francesco Zonta from the Laboratory of Phenotypic Screening recently published a paper in collaboration with EMBL Hamburg, University of Parma and University of Padua. This paper, entitled “Structural evidence for asymmetric ligand binding to transthyretin”, is in print inActa Crystallographica section D (http://dx.doi.org/10.1107/S1399004715010585).

Human transthyretin (TTR) represents a notable example of an amyloidogenic protein, and several compounds that are able to stabilize its native state have been proposed as effective drugs in the therapy of TTR amyloidosis. The two thyroxine (T4) binding sites present in the TTR tetramer display negative binding cooperativity. Here, structures of TTR in complex with three natural polyphenols (pterostilbene, quercetin and apigenin) have been determined, in which this asymmetry manifests itself as the presence of a main binding site with clear ligand occupancy and related electron density and a second minor site with a much lower ligand occupancy. The results of an analysis of the structural differences between the two binding sites are consistent with such a binding asymmetry. The different ability of TTR ligands to saturate the two T4 binding sites of the tetrameric protein can be ascribed to the different affinity of ligands for the weaker binding site. In comparison, the high-affinity ligand tafamidis, cocrystallized under the same experimental conditions, was able to fully saturate the two T4 binding sites. This asymmetry is characterized by the presence of small but significant differences in the conformation of the cavity of the two binding sites. Molecular-dynamics simulations suggest the presence of even larger differences in solution. Competition binding assays carried out in solution revealed the presence of a preferential binding site in TTR for the polyphenols pterostilbene and quercetin that was different from the preferential binding site for T4. The TTR binding asymmetry could possibly be exploited for the therapy of TTR amyloidosis by using a cocktail of two drugs, each of which exhibits preferential binding for a distinct binding site, thus favouring saturation of the tetrameric protein and consequently its stabilization.

“In the contest of this study, computer simulation carried on by the informatic platform in SIAIS, took an important role, as they provided a clear indication on the dynamics of the TTR complex, and the origin of its asymmetric structure.” Francesco Zonta said. 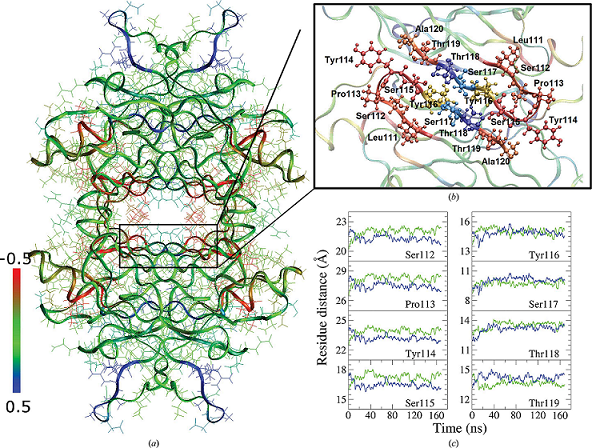